In Defence of Rivers and Streams 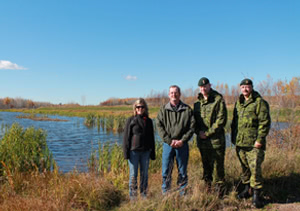 27 May 2014 – When one thinks of the Canadian Armed Forces and their role, defence tends to be one of the first things to come to mind. The men and women at 5th Canadian Division Support Base Gagetown in Oromocto, New Brunswick help defend our nation and its citizens. However, with the help of DUC, they are also defending the rivers and streams in their community.

In the 1990s, the base was in the midst of desert training for Operation Desert Storm and had made some changes to the landscape at the base in order for it to more closely resemble a desert environment. While this resulted in excellent training opportunities for the troops, it also resulted in silt run-off potentially heading into the Oromocto River, a 42-km long tributary of the Saint John River and a popular fishing destination for pickerel and bass.

“We knew that we had lost some existing wetland during these exercises,” said Deanna McCullum, range biologist with Base Gagetown. “We wanted to have a means to capture sediment, but didn’t want a high-maintenance, high-cost, engineered sediment pond. Someone mentioned the farm ponds that DUC builds, and it sounded like something similar would work well for us.”

McCullum got contacted Joe Harvey, now retired, who was a conservation programs specialist with DUC. The first DUC-restored wetland was in the ground by summer of 2006.

“Since then, we’ve restored about 320 acres of wetlands at the base,” said Harvey. “After I retired, I worked on contract with them to keep restoring more. We have additional wetland restoration projects planned every year.” McCullum says that they are now looking to put them in areas where they train for cross-country/overland maneuvers, as strategic preventative measures against silt disturbance.

Besides the environmental benefit, the wetlands provide educational opportunities, both in the community and beyond.

“We do environmental briefs with our own units as well as with visiting units,” said McCullum. “We’ve also hosted school tours, dignitaries and numerous other groups, and have taught them about the impressive and extensive environmental benefits of wetlands. This project and this partnership with DUC has created so many rewards, both for us and for the larger community.”