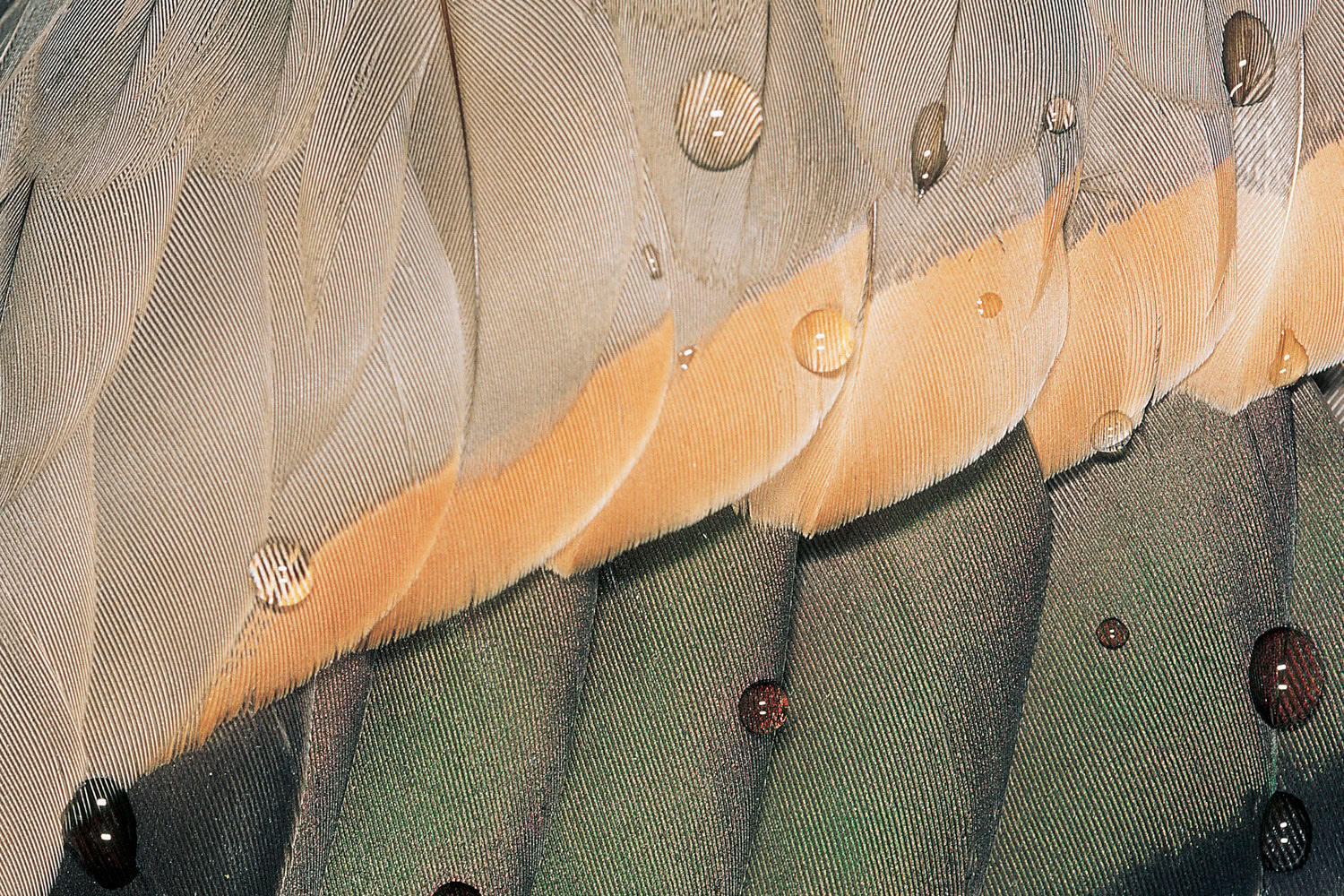 In the sixth century, they were essential pieces in stationery sets. In the early 1900s, they became fashion statements. Today, feathers continue to make their way into high-end bedding and coats.

But these aerodynamic, evolutionary natural marvels are a great deal more than a commodity, especially to the birds who sport them.

Feathers provide waterfowl with necessary insulation, help distinguish between species and genders, and are often used in courtship displays. They also allow them to take wing and travel significant distances.

While many of the practical functions of feathers may be old news, have you ever considered what a feather could reveal when placed in the hands of a DUC researcher?

According to David Howerter, DUC’s director of conservation science, the sky’s the limit. “This is really an active field of research,” he says.

Do you remember the old cliché, “you are what you eat”? Well, while you’re not likely to turn into that breakfast burrito you ate any time soon, the old idiom carries some weight when it comes to analyzing feathers.

Here’s why: “feathers are constituted of the elements in the bird’s food,” says Howerter. Every single food item that a bird harvests from nature will have its own unique chemical make-up, based on where the food was grown or spent time. For instance, a worm in Louisiana will have a different chemical make-up than one gobbled in the boreal forest.

Once a bird has eaten the food item, its body tissue absorbs the stable isotopes and takes on the chemical signature of the area where it was consumed.

Unlike other body tissue, feathers grow in a relatively short span of time. Once they’ve finished growing, they become what scientists like to call “metabolically inert.” This means that when a feather is fully grown, what a bird eats from that point on will no longer influence the chemical signature of that particular feather. “The interesting thing about that is different feathers are moulted at different times of the year. If you have multiple feathers from a single bird, you can string that information together and understand where they’ve been,” says Howerter.

Importance: By understanding where waterfowl have travelled, researchers can pinpoint important habitat areas.

Never ask a duck their age

Forget counting candles on a birthday cake. To discover the age of a duck, researchers will look closely at their feathers.

By examining a duck’s greater secondary covert feathers (the colourful, species-specific feathers on a wing) scientists can determine if a duck is in its first year, or older. “We’re able to age the birds based on the patterning,” says Howerter. In the case of mallards, older birds will have more white and black on their secondary covert feather, compared to a younger bird who will have less.

Another way to to age a bird is to look at the composition of its tail feather. Is there fuzzy down still attached to it? Is there a prominent notch at the end? If so, it once belonged to a young duck. As waterfowl age, the “downy” tip of the feather breaks off.

Importance: By being able to age waterfowl, researchers can understand the age structure of the population and how many young were produced the previous breeding season. “It’s an index to how those populations are growing or how successfully they are reproducing,” says Howerter.

Taking a pulse on stress levels

Unlike people, we can’t rely on ducks to tell us when they’re feeling anxious. And so, researchers look to feathers to see what stories they reveal about what stresses the bird has experienced.

“When you’re stressed or scared, you produce adrenaline. So do waterfowl, and that adrenaline leaves a signature in a developing feather, especially if it’s chronic,” says Howerter. DUC researchers at are at the front-end of understanding the full implications of being able to assess a species’ stress levels. However, it is known that if stress becomes chronic, it can impede reproduction in waterfowl, as well as suppress immune responses.

Some factors that could influence a duck’s adrenaline levels include habitat loss and food scarcity.

Importance: DUC is in the fourth year of a five-year study in the boreal forest where researchers are collecting feathers from waterfowl in highly disturbed areas as well as remote, untouched spaces. By analyzing the stress hormones present in the feathers left by waterfowl in both disturbed and undisturbed areas and comparing them, researchers will be able to assess the impact development can have on population dynamics.

A less intrusive way to check in

So, why all the fascination with feathers? Not only do researchers stand to learn a lot by collecting and analyzing a single feather, but it’s also a less intrusive way of checking in. Some bird species, like sharp-tailed grouse, aren’t receptive to traditional methods of monitoring, says Howerter. “Sharp-tailed grouse don’t respond well to having a radio transmitter put on them. They just shut down,” he explains. And so, it comes down to a feather.

“By collecting a feather that has been shed on the ground, you know you’re not influencing the bird in any way by using it.”

Importance: By being able to monitor bird species without influencing their behaviour, researchers can continue to collect important data. This is essential when looking at species like the sharp-tailed grouse, which are easily altered by human interference. DUC is currently supporting the Sharp-tails Plus Foundation, a non-profit organization based in western Manitoba that’s studying the sharp-tail grouse.

What can I (a non-scientist) learn from a feather?

Despite everything a feather can tell us, many of these discoveries can’t be made by the naked eye. Rather, they require years of expertise and study, as well as the appropriate lab equipment. And so, as scientists continue to analyze feathers under microscopes and share their findings, we’ll continue to admire them on the wings of waterfowl as they take flight.

Importance: DUC’s world-leading research guides our on-the-ground conservation work to achieve the best outcomes for people and wildlife. Science empowers us to make a real difference, and it’s what sets us apart as Canada’s leader in wetland conservation. To learn more about the role research plays in DUC’s work, visit ourInstitute for Wetland and Waterfowl Research page.