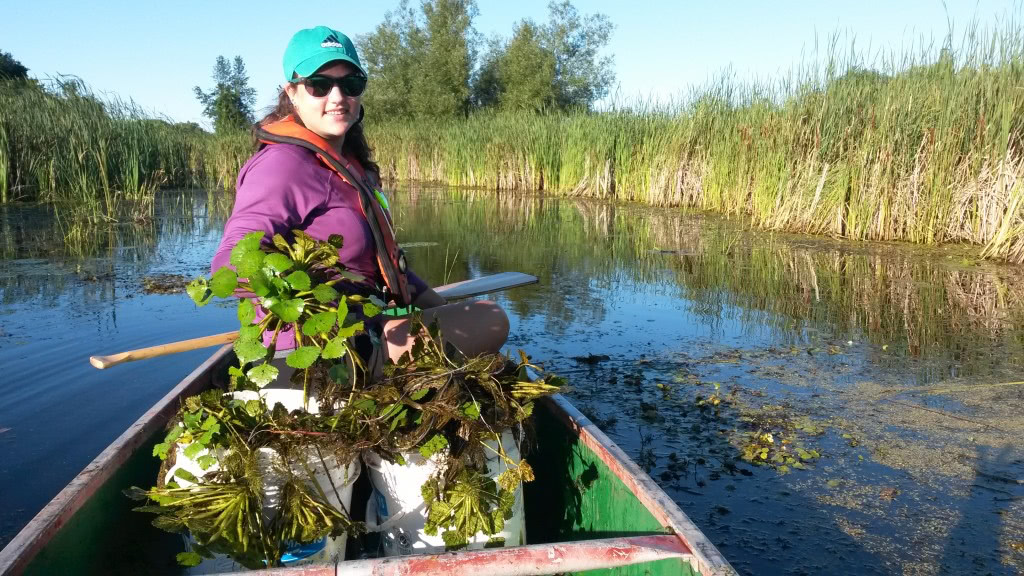 When he was 11 years old, Lee MacLaren’s job was to clean as many brown bullhead catfish as he could before he’d have to get ready for school.

“I would get up and head down to the fish house. I would get the coal fire started and I would immediately start cleaning,” MacLaren recalls. His father would pay him for his efforts.

That was over 20 years ago. In those days, business was booming for MacLaren Fisheries, a family-owned enterprise that trawls the waters of Bayfield Bay, near Wolfe Island, Ont.

But in recent years, MacLaren has seen a decline in native fish, which he links to the re-emergence of double-crested cormorants and the appearance of invasive species like round goby, and zebra mussels. In 2013, a new threat was added to the list: invasive European water chestnut (Trapa natans).

“When this stuff gets a hold of something it goes from looking like a body of water to a hay field, and nothing can eat it,” says MacLaren.

Introduced to the United States in the 1870s, European water chestnut is an annual aquatic plant that is capable of suffocating an entire ecosystem by reducing dissolved oxygen levels in the water.

It does this by aggressively covering a surface with dense floating foliage. The cover makes it nearly impossible for sunlight to penetrate the water, which in turn stunts and kills oxygen producing native aquatic plants.

At its worst, European water chestnut creates uninhabitable conditions for fish, plants, and reduced food supply for waterfowl (who feed on both). By covering the water surface, it also makes recreational activities like hunting, swimming, boating and angling a challenge, if not impossible.

In the province of Ontario, the plant is currently found on, or in areas connected to, the St. Lawrence, Rideau and Ottawa rivers as well as eastern Lake Ontario.

To combat the problem, DUC is working in partnership with the Ontario Ministry of Natural Resources and Forestry, the Invasive Species Centre and the Ontario Federation of Anglers and Hunters on the European Water Chestnut Eradication Program.

Through collaboration, they are identifying and removing by hand the aquatic plants from eastern Lake Ontario and the St. Lawrence waterway.

“The difficult thing about this plant is that it can submerge itself with increased winds, current or boat wake. This ability means that we can easily miss some plants while being right on top of them in the boat or canoe. It’s really a cat and mouse game,” says Justin White, the Ontario DUC coordinator of the European Water Chestnut Eradication Program.

That’s why DUC is looking for the public’s help.

“We need more eyes on the water,” says White. “If more residents and visitors to communities like Wolfe Island keep an eye on the shoreline or the shallow bays where they enjoy recreational and commercial activities, we have the opportunity to spot plants before they drastically alter our natural ecosystem,” says White.

Wolfe Island resident and DUC supporter David Wollin canoes and hunts ducks along Bayfield Bay. He’s noticed the aquatic plant while out on the water. “It needs looking after, and that’s a major job,” says Wollin, who helps by pulling the plants out of the water when he encounters them.

With continued help from people like Wollin, White is confident that they can safeguard the bays around Wolfe Island “If we work at it together, we can eradicate this problem plant.”

For his part, MacLaren’s thankful for the work being done by DUC and its partners that will allow his family and others to continue their livelihoods and traditions. “Ducks Unlimited is doing the right thing…and they’re managing to get on top of it now before it’s too late.”