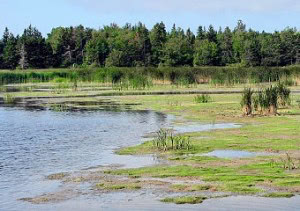 Two islands protected in the Montreal and Outaouais regions –in memory of loved ones who passed away.

On the occasion of World Turtle Day, the Nature Conservancy of Canada (NCC) is announcing the protection of two new properties, île Hébert on the Lake of Two Mountains at the western tip of Montreal Island, and île Reid on the Ottawa River, east of Isle-aux-Allumettes.

One of the properties was donated for conservation in honour of a loved one who passed away. Thanks to the Hébert family’s donations and to contributions from generous partners, these important habitats will remain in their natural state as safe havens for multiple species at risk, including the map turtle.

To help protect turtles across the province, NCC is launching the carapace.ca website, an online tool for residents throughout Quebec to report turtle sightings. This will help identify locations in need of conservation action.

“The Government of Canada is proud to support the conservation of Île Hébert in the Lake of Two Mountains and wishes to congratulate the Hébert family for its generous donation as part of the Ecological Gifts Program. We are also proud to contribute, through the Natural Areas Conservation Program, to protecting this island, as well as Île Reid in the Ottawa Valley. These investments reflect our government’s support for the protection of wildlife and plant habitats in these regions,” said Francis Scarpaleggia, MP for Lac-Saint-Louis, who participated in the event.

Île Hébert: at the heart of the map turtle’s habitat

Île Hébert is located about one kilometre southwest of the Île-aux-Tourtes bridge, in the Lake of Two Mountains, in Senneville. With an area of 0.45 hectares (1.11 acres), it has around 420 metres of shoreline.

This area is crucial habitat for map turtles, which are considered vulnerable under the Quebec Act Respecting Threatened or Vulnerable Species (ARTVS) and of concern under the Species at Risk Act of Canada.

This crescent-shaped island protects turtles from the wind and waves. Moreover, several plant species that are likely to be considered threatened or vulnerable under the ARTVS are on the island, including shagbark hickory, swamp white oak, Virginia mountain-mint, false dragonhead and northern dewberry. The site is also a prime breeding and brood-rearing habitat for approximately 20 species of waterfowl, as well as for shorebirds.

The generous donation of the island was made as part of the Government of Canada’s Ecological Gifts Program, which offers valuable tax benefits for donations of ecologically sensitive land.

“The family of Norman D. Hébert, who passed away in 2015, wishes to honour his memory by donating this island to the Nature Conservancy of Canada. This small gem of nature in the Lake of Two Mountains will forever shelter these rare plants and trees, while continuing to provide a safe haven for turtles,” state the children and grandchildren of the late Norman D. Hébert.

Île Reid, which has an area of 27.9 hectares (69 acres), is located east of Isle-aux-Allumettes, in a channel of the Ottawa River. It consists entirely of forest and wetlands.

“The protection of this island represents NCC’s fourth securement in the Isle-aux-Allumettes region and has enabled us to double the size of protected areas in the region with a total of 53 hectares (130 acres) of habitat,” states Caroline Gagné, program director at the Nature Conservancy of Canada, Quebec region. “We are grateful to the family who agreed to sell the island to the Nature Conservancy of Canada, a gesture made in memory of Kenneth J. Serdula and F. Ann Serdula, both of whom spent great moments enjoying this territory.”

The Carapace Project: putting technology to work for turtles!

NCC, with help from its partners, is launching an interactive platform for reporting turtle sightings throughout Quebec: carapace.ca. This easy-to-use tool is for public use and is intended mainly to collect information on hot spots of road fatalities for turtles, including identifying zones where they could be hit by cars.

This data will enable NCC and its partners to take appropriate conservation measures to ensure the survival of these species and the protection of their habitats. Thank you for helping to protect turtles!

The Nature Conservancy of Canada expresses its heartfelt thanks to the family of Norman D. Hébert for its generous donation of land.

Thank you also to the Serdula estate who chose to deal with NCC. Protection of these properties was made possible thanks to contributions from the Government of Canada’s Natural Areas Conservation Program, the U.S. Fish & Wildlife Service and private donors.

The Nature Conservancy of Canada (NCC) is Quebec’s and Canada’s leading not-for-profit private land conservation organization, working to protect our most important natural areas and the plants and animals they sustain. Since 1962, NCC has helped protect more than 1.1 million hectares (2.7 million acres) across the country, including 40,000 hectares (98,840 acres) in Quebec. It is by protecting and managing these natural environments that they can be made accessible to this generation and those to come. To learn more, visit natureconservancy.ca.

The Government of Canada’s Natural Areas Conservation Program (NACP) is a unique public-private partnership led and managed by the Nature Conservancy of Canada. To date, $345 million has been invested in the NACP by the Government of Canada to secure our natural heritage. Additionally, more than $500 million in matching contributions has been raised by NCC and its partners for investment in the Program.