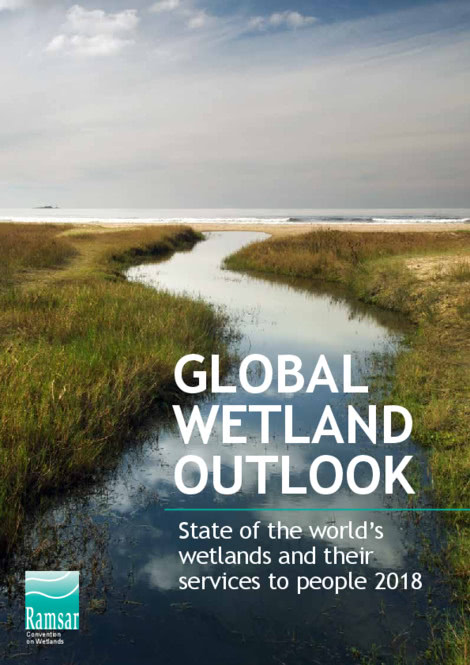 Wetlands, the most economically valuable and among the most biodiverse ecosystems in the world, are disappearing three times faster than forests with severe consequences for our future unless urgent action is taken to ensure their survival, warns a new report by the Ramsar Convention on Wetlands.

Approximately 35 per cent of the world’s wetlands were lost between 1970-2015 with annual rates of loss accelerating from 2000, according to the first-ever Global Wetland Outlook of the Ramsar Convention, a global treaty ratified by 170 countries to protect wetlands and promote their wise use. The report shows every region is affected.
Losses have been driven by megatrends such as climate change, population increase, urbanization, particularly of coastal zones and river deltas, and changing consumption patterns that have all fuelled changes to land and water use and to agriculture.

Wetlands, which include lakes, rivers, marshes and peatlands as well as coastal and marine areas such as estuaries, lagoons, mangroves and coral reefs, are currently estimated to cover more than 12.1 million km2, an area greater than Greenland. Between 13-18 per cent of them are on the Ramsar List of Wetlands of International Importance, which are protected sites.

Wetlands are critical to human and planet life. Directly or indirectly, they provide almost all of the world’s consumption of freshwater. More than one billion people depend on them for a living and 40 per cent of the world’s species live and breed in wetlands. They are a vital source for food, raw materials, genetic resources for medicines, and hydropower; they mitigate floods, protect coastlines and build community resilience to disasters, and they play an important role in transport, tourism and the cultural and spiritual well-being of people.

Studies show the economic value of services provided by wetlands far exceeds those of terrestrial ecosystems. Inland wetlands, for example, have a total economic value five times higher than tropical forests, the most valuable terrestrial habitat. Wetlands are also essential to efforts to regulate the global climate. Peatlands store twice as much carbon as the world’s forests despite accounting for just three per cent of the world’s land surface, with salt marshes, sea grass beds and mangroves also carbon-dense ecosystems. However, wetlands produce 20-25 per cent of global methane emissions and rising temperatures from climate change are expected to increase greenhouse gases from wetlands, particularly in permafrost regions.

The persistent and growing threat to the world’s remaining wetlands from water drainage, pollution, unsustainable use, invasive species, disrupted flows from dams and sediment dumping from deforestation and soil erosion upstream is detailed in the GWO, released ahead of the 13th Meeting of the Conference of the Parties (COP13) in Dubai, UAE.
Water quality trends are worsening with nearly all fresh water sources in the world compromised to some extent. Water pollution and nutrient loading from fertilizers are among the biggest challenges. According to the UN, more than 80 per cent of waste water is released into wetlands without adequate treatment while fertilizer use in 2018 is likely to be 25 per cent higher than in 2008, exacerbating excessive wetland plant growth and levels of decomposition resulting in oxygen starvation for flora and fauna alike.

The biodiversity crisis is just as alarming.

More than 25 per cent of all wetlands plants and animals are at risk of extinction. The IUCN’s Red List Index which assesses survival probability using available data has identified negative trends for wetland mammals, birds, amphibians and corals, an indication they are heading for extinction. Coral reefs are declining fastest due to rising sea temperatures, while amphibians have the lowest numbers and are the most threatened. Wetland fish, reptiles and large mammals are also vulnerable with every turtle species globally threatened and a third critically endangered.

“The Global Wetland Outlook is a wake-up call – not only on the steep rate of loss of the world’s wetlands but also on the critical services they provide. Without them, the global agenda on sustainable development will not be achieved,” says Martha Rojas Urrego, Secretary General of the Ramsar Convention on Wetlands. “We need urgent collective action to reverse trends on wetland loss and degradation, and secure both the future of wetlands and our own at the same time.”

The Parties to the Ramsar Convention have committed to the conservation and wise use of all wetlands. Although they have designated more than 2,300 sites of international importance so far, making the Ramsar List one of the world’s largest networks of protected areas, designating new sites for protection is not enough.

The GWO emphasizes the necessity of developing effective wetland management plans and integrating wetlands into the planning and implementation of national plans on sustainable development, climate change and other key global commitments.
The report also stresses good governance and effective institutions at local, national and regional levels as a crucial factor in preventing, ending, and reversing trends in wetland loss and degradation. More accurate data on wetland extent and wetland inventories is needed to help countries identify priority sites for restoration. Indigenous and local knowledge as well as citizen scientists are already invaluable resources on the state of wetlands and can be used more.

Drawing on successful examples across the world, the report recommends using existing funding mechanisms to apply economic and financial incentives for communities and business to protect wetlands through tax benefits. Perverse incentives for farmers and business such as subsidies to agriculture that encourage wetland conversion or pollution should be ended.

Additional recommendations include identifying solutions for wise use of wetlands that draw upon all expertise, ranging from hard science to traditional knowledge, to secure wide engagement on wetland protection and wise use and ensure sound decision-making. The GWO’s findings are expected to inform discussions and decisions at the Ramsar COP13 (21-29 Oct).

“There is a slow awakening to the value of wetlands. Across the globe, legislative bodies need to integrate wetlands into policy programs and make investments into their sustainability. We need to educate the world on the critical importance of this most rapidly disappearing ecosystem. Without the world’s wetlands, we all hang in the balance,” asserts Rojas Urrego.