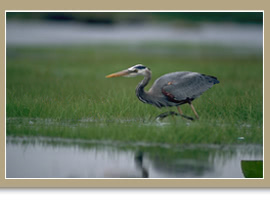 Canadians cherish nature and depend on it for clean air and water, vibrant communities, and solutions to climate change. Home to the longest coastline in the world; one quarter of the earth’s wetlands and boreal forests; 20 percent of its fresh water; and precious habitat for birds, fish, and mammals, Canada has a special responsibility to protect nature today and for generations to come.

That’s why the Government of Canada launched Canada’s $1.35 billion Nature Legacy initiative, the single-largest investment in nature conservation by a government in Canada’s history. Canada’s Nature Legacy will help double the amount of nature protected on land and in our oceans, transform how government protects and recovers species at risk, and advance reconciliation with Indigenous Peoples. Conservation also contributes to Canada’s economy through tourism and jobs, and it can bring benefits 10 to 20 times greater than the original investment.

Today, the Minister of Environment and Climate Change, Catherine McKenna, announced the first in a series of 67 conservation initiatives launching in every province and territory, as part of Canada’s Nature Legacy initiative. These projects are supported by the $175 million federal Canada Nature Fund’s Target 1 Challenge, to expand a connected network of protected and conserved areas across Canada.

Minister McKenna announced $3.9 million in federal funding to help the Tahltan Central Government work with its members and other stakeholders on a land-use planning process that provides further clarity and certainty across their territory in northwestern British Columbia. The Tahltan Nation have been leaders in working with British Columbia to advance environmental stewardship and protection along with strong economic development focused on mining and its related business. The Tahltan Nation’s territory is home to various species at risk and culturally significant boreal forest watershed and wetland habitat. Conservation efforts in the region would enhance connectivity with the Yellowstone to Yukon corridor, the Great Bear Rainforest, and other protected areas.

Further details about other projects moving forward under the Canada Nature Fund’s Target 1 Challenge will be released as agreements with local partners are finalized.

Minister McKenna also announced that the Government of Canada intends to invest through Canada’s $100 million Natural Heritage Conservation Program, in advancing the protection of additional hectares of land and water in Clayoquot Sound, in partnership with the Ahousaht and Tla-o-qui-aht First Nations and non-profit organizations. This support will help to connect Strathcona Provincial Park with the outer coastal provincial parks and Pacific Rim National Park Reserve. The investment will also protect important habitat for over 15 federally listed species at risk, support the land-use visions of the Ahousaht and Tla-o-qui-aht First Nations, and enhance their capacity to fully participate in the process.

While making the announcement on conservation initiatives, Minister McKenna took the opportunity to release a report card on the progress Parks Canada is making on implementing the 75 recommendations arising from the 2017 Minister’s Round Table Let’s Talk Parks, Canada!, the largest public engagement in Parks Canada’s history. One of the key recommendations was the establishment of an independent working group focused on ensuring that the principles of ecological and commemorative integrity are the first priority when making decisions at Parks Canada. Dr. Peter Robinson, previously the CEO of Mountain Equipment Co-op and the David Suzuki Foundation, led the independent working group and will continue to advise Parks Canada on the ongoing implementation of the commitments. The independent working group’s report released today will help to ensure that national parks can continue to be diverse and healthy ecosystems for the future, and national historic sites can continue to tell the many stories that have shaped our country and our shared heritage.