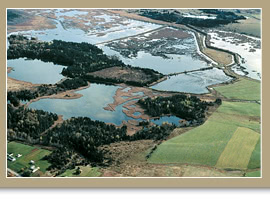 The following Eastern Habitat Joint Venture (EHJV) vision, mission and goals reflect the wording from the EHJV 2013 Strategic Plan which is currently being finalized.

To provide a forum where interested parties work collaboratively to coordinate and deliver effective migratory bird-habitat conservation in Eastern Canada.

The EHJV has been guided by the successive NAWMP Planning documents since the original 1986 NAWMP Plan. The EHJV Implementation Plan 2015-2020 reflects the direction and priorities of the most recent North American Waterfowl Management Plan 2012: People Conserving Waterfowl and Wetlands.

Habitat: Maintain the carrying capacity of the habitat in eastern Canada at a level capable of sustaining populations of breeding staging and wintering waterfowl and other migratory and non-migratory birds at long-term average levels (1990-2014).

People: Programs and projects are undertaken that support and advocate for growing numbers of waterfowl hunters and other conservationists and citizens that enjoy and actively support the conservation of migratory and non-migratory bird populations that rely on wetlands and associated upland habitats and coastal habitats.