The Prince Edward Island Eastern Habitat Joint Venture (PEI-EHJV) of the North American Waterfowl Management Plan (NAWMP) works to conserve the Province’s coastal estuaries and wetlands for the benefit of waterfowl and other migratory birds and for the Province’s overall biodiversity. Because of the significance of agriculture across the Province, PEI-EHJV partners often work in partnership with local landowners.

The PEI-EHJV programs are administered through the Prince Edward Island Department of Communities, Land and Environment  – Fish and Wildlife Division. 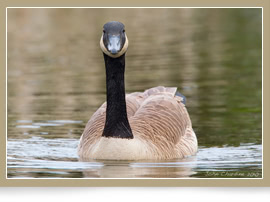 Since 1989, partners have secured and protected 1,750 hectares of wetland habitat, restored
500 hectares of small wetlands and currently manage 1,575 hectares of large wetlands. 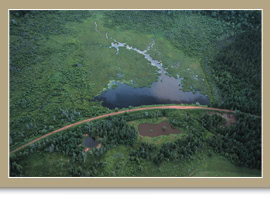 Between 1989 and 2011, PEI-EHJV partners invested over $4 million to secure high priority wetland habitats in the Province. Over
2,300 hectares of valuable wetlands
have benefited.

PEI-EHJV partners have enhanced 10,500 hectares of wetland and upland habitat for the benefit of waterfowl and other migratory birds. Between 1989 and 2011, over $6 million was invested in enhancement activities in the Province’s high priority wetland areas.InvestmentOver $17 million has been invested in PEI-EHJV programs to conserve and increase the wildlife productivity and improve wetland and upland habitat at NAWMP priority sites. 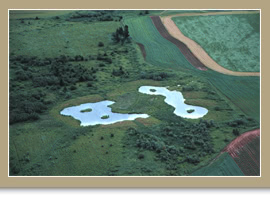 The Small Marsh Restoration Program
PEI’s small wetlands have been seriously impacted by land-use activities over the past several hundred years. The Small Marsh Restoration Program, funded by the PEI-EHJV, was designed to help farmers enhance their property and improve the amount of available waterfowl habitat. The program restores small wetlands that have been drained, in-filled or choked
with vegetation. 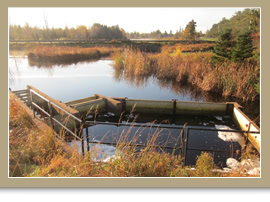 At 0.4 hectares, the Gill Marsh Project is a typical Small Marsh Restoration Program wetland project. It is located in an agricultural landscape and is comprised of small, shallow wetlands that are productive as pairing ponds for a variety of dabbling duck species. When adequate cover is present in buffer zones, these projects can also provide good nesting and brood rearing habitat.

Another example of the Small Marsh Restoration Program is the Johnston’s River Project. This 111-hectare impoundment (along Johnston’s River) with adjacent salt marshes, makes it a significant breeding area for Black Duck, Green-winged Teal and Canada Geese. The project was originally purchased by the PEI-EHJV and is now owned and managed by the Prince Edward Island Department of Communities, Land and Environment  –  Fish and Wildlife Division. As of July 2013, a total of
12 wetland restoration and farm pond projects
have been completed across the Province. 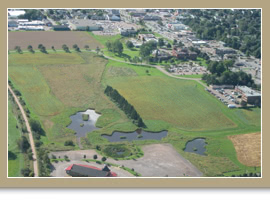 In 2007, PEI-EHJV partners, in partnership with Agriculture and Agri-Food Canada, restored a weltand on the Experimental Farm property below the Charlottetown Farmers’ Market. The wetland is referred to as the “Ag Demo Site” and is one of four

restored segments of a historically altered wetland that was drained and filled in the 1800s. The old wetland spanned over three kilometres through the heart of “Port le Joix”, now the City of Charlottetown. During construction ancient clay drainage tile was uncovered – it was common practice for wealthy landowners to use tile to drain wetlands and convert them to crop lands. The Ag Demo Site is a great example of how small marsh restoration can be integrated into best-management practices for agricultural producers
and landowners.

In 2003, Prince Edward Island became one of the first provinces in Canada to adopt a wetland policy.